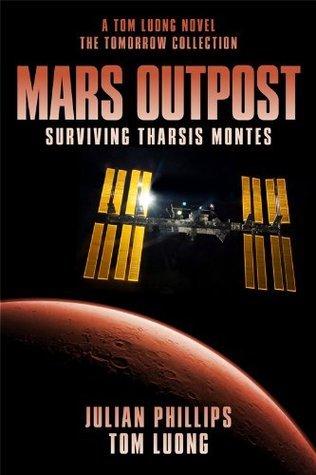 Cargo ships move back and forth with goods, a journey that takes just more than a year. Our hero is adventurous cargo pilot Guy Reisling. About this time, space science on Earth and star observatories conclude that a rather large asteroid will either hit the Earth, or come very, very close to a strike, in about five years.

But our story is not about the meteor. The novel spans this five year period, during which time the Eastern Russian-Islamic/Ukrainian-Hindustan space program alliance on Earth, secretly launch their own ships to Mars, to take control of the US base there by force, and provide for themselves if and when the approaching asteroid actually causes significant Earth devastation. The US Mars base operations, with about 230 people who live and work there, are peaceful and scientific or research-oriented only.

The base has no weapons or only very few, and functions year round in the hot and cold, very thin, almost non-existent Mars atmosphere, an airtight high-tech fortress at the feet of the towering Tharsis Montes mountains. Guy Reisling and his crew, Mars program director Lynn Rodgers-Smith, Mars-base commander Bojji-Than, and other colorful characters, have a year to prepare for the advancing Russian-Islamic ships, and then must somehow find a way to defend the base itself and residents, as the US Mars ships sent to save them, led by experienced space-pilot and Mars fleet commander Winton ‘Kick’ Berle, finally arrive months later.

At the same time, international intrigue back home on Earth, creates an East-West conflict between the competing space-programs, and their considerable value to the future.